After installing Bravo Notes from the marketplace you can find the extension in the main vertical navigation. 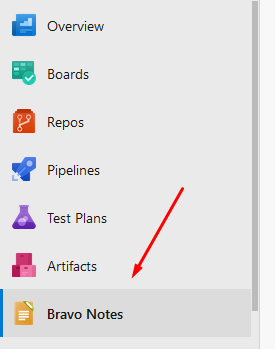 Bravo Notes is a product to help you create and distribute information about the software you build using content from work items in Azure DevOps.

While release notes is the most obvious use case, Bravo Notes is also used to create and publish other kinds of documents like weekly reports and documentation.

Bravo Notes offers a variety of options and a powerful template syntax that gives you full control over the structure of the final document.

Ways to integrate Bravo Notes in your process

Automatically generate documents as part of a build / release pipeline

Did this answer your question? Thanks for the feedback There was a problem submitting your feedback. Please try again later.